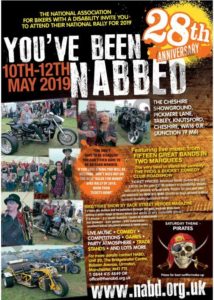 Mulderrigs are delighted to be associated with NABD 28 this weekend – the 28th annual rally for the fab NABD (The National Association for Bikers with a Disability).

NABD have been doing amazing work in support of disabled motorcyclists for over twenty-eight years under the guidance of their amazing (but slightly crazy) guru, Rick Hulse.

And we are very proud to have been associated with Rick and his team almost from the get-go.

We have successfully represented lost of NABD members over the years.

And here’s the deal …. If you’re not wearing your wrist band sponsored by Mulderrigs – you ain’t getting in to the rally!

You can also check out NABD on Facebook … They’re a truly magnificent bunch!

Andy Cotton asked us to deal with his motorcycle injury claim following a very serious accident.

He was riding his motorcycle along a bypass in Lancashire when an elderly driver pulled out from junction right into his path.

Dave Harding was badly injured whilst riding hom on  his Honda NTV in Deptford.