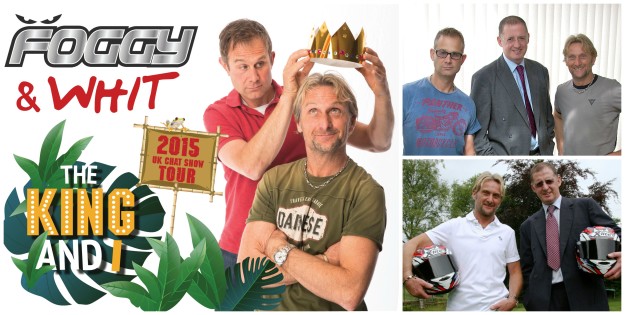 Mulderrigs are happy to announce that we will once again be sponsoring British Superbike legends Carl Fogarty and James Whitham as they embark on all-new chat show for 2015.

Foggy and Whit ‘The King and I’ is a hilarious evening of stories and chat featuring four-time World Superbike Champion Carl Fogarty, along with his good friend and former British Superbike Champ, James Whitham.

The one-off show hits Preston’s Guild Hall on Wednesday 23rd September and tickets are available here for £25 each. The venue is sure to sell out fast so get your tickets while you still can!

Fresh from being crowned King of the Jungle in the winter, Carl Fogarty was happy to be teaming up with Mulderrigs and said: “This is the fourth time Mulderrigs Solicitors have sponsored our show and we’re very happy to be associated with them once again.

Mulderrigs are experts in motorcycle accident claims. They do some great work to help injured bikers recover compensation after their accidents.”

Foggy & Whit’s 2014 ‘Givin it Gas’ tour, also sponsored by Mulderrigs, was a runaway success in 2014. The motorbike legends packed out six venues across the country and earned rave reviews from critics.

If you would like to learn more about the work Mulderrigs do for injured bikers please check out our motorcycle accidents page.