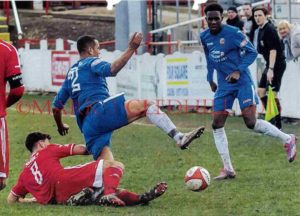 It’s not every day that one of our cases makes national news.

But that’s exactly what happened in a case involving our client Rees Welsh just last week.

Rees consulted us in 2015 after he was badly injured as a result of a foul challenge.

His injury occured during a semi-professional football match at Ossett in West Yorkshire.

Although Rees made a reasonable recovery he still has problems with the injury.

And he never returned to the same level of semi-professional football.

Paul Mulderrig has been practising in this difficult area of the law for over twenty years.

And he took the view that Rees had reasonable grounds for bringing a claim.

The case came on for a two-day trial in the County Court at Manchester earlier this month.

After hearing all the evidence the Judge agreed that Rees’s injury had been caused by a negligent challenge.

And because the opposing player was playing semi-professionally his club were responsible for his actions.

But the case made Sky Sports News because the opposing player and his club were not covered by adequate insurance.

So Rees faces a real challenge to recover his damages and legal fees.

And the opposing player and his club face very substantial financial liabilities.

It has even been suggested that the club may have to sell their ground.

Paul appeared on the Radio Four programme You & Yours on 22nd November when the story was covered at some length.

Paul has been lobbying the FA since way back in 2005.

He has  repeatedly urged the FA to introduce a compulsory requirement for clubs to have public liability insurance which includes cover for “player-to-player” incidents.

But very little has changed.

Paul says: “The FA’s lack of action is particularly appalling because we have all been here before.

“In 2010 a very similar claim almost led to the closure of the long-established Ashton United.

“When are the FA going to learn?

“And what are they going to say to the next badly injured player and the next non-league club that find themselves in this awful position?”

The Non-League Paper is “the bible” of the non-league game.

They gave extensive coverage to the story last weekend, including a very fair summary of the statement issued by Paul Mulderrig.

The story was also covered in the Daily Telegraph.

Paul offered this last word on the subject (for now):-

“The FA are supposed to be the guardians of the game.

“We can only hope that all the negative publicity surrounding this difficult case will prompt the FA to do what they should have done years ago.

“They must introduce a nationwide rule for all players and clubs to have the benefit of public liability insurance which includes “player-to-player” cover.

“If they won’t do that I challenge them to debate me on air any time, any place to explain their irresponsible position.”