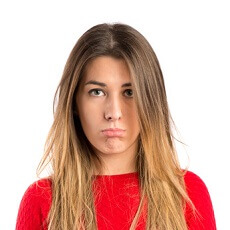 Andrea Riley, a swimming coach from Sale instructed Mulderrigs in her hair damage claim following an overprocessing error by her hairdresser.

She went to a salon she had never been to before to have her hair dyed.

Andrea wanted to have some red tinges removed from her hair because she had birthday celebrations and holidays coming up.

Even though it was Andrea’s first visit to the salon the hairdresser didn’t carry out any tests on her hair before applying a colour.

After the first application of colour Andrea’s hair had gone lilac colour that she didn’t want.

So she was invited back to the salon to rectify the colour.

But after application of another colour her hair went so dark it was almost black.

Andrea was still very unhappy and she was invited back to the salon where a bleach was applied to try and lighten the black.

Andrea quickly noticed that her hair was now very weak and snapping off.

And this continued throughout a family holiday to Australia.

So Andrea contacted us when she got back from holiday.

The Law On Claiming Compensation For Hair Damage

All hairdressers have a legal duty to take care for the safety of their clients.

This is particularly important when they are using dangerous bleaches and colours which can easily cause serious damage if not used properly.

But suing a hairdresser is a complicated business.

So it is essential that you instruct a solicitor with experience of these cases.

Jo Smith and her team have dealt with hundreds of successful claims against negligent hairdressers.

So Jo was happy to take on Andrea’s case and we agreed to act on “no win no fee” terms.

The success of hair claims is also dependent on obtaining supportive evidence from a hair expert – a trichologist.

In Andrea’s case the trichologist was  very critical of the hairdresser.

He said that the hairdresser should have tested strands of Andrea’s hair before applying any of the products.

The expert was particularly damning about the application of bleach which should never have applied to hair that was that was already weakened from the previous colours.

The bleach had caused the hair to become overprocessed.

When we contacted the salon’s insurers they denied liability.

The insurers even tried to blame the fact that Andrea was a swim coach, saying that the time she spent in a pool caused the damage.

We had to issue Court proceedings and the salon’s solicitors continued to defend the claim.

We took detailed statements from Andrea and her mum.

But when the time came to exchange statements the salon were unable to serve a signed statement from the stylist who had performed the negligent treatment.

They also disclosed customer record cards which didn’t match their version of events.

When we pointed out all these inconsistencies to the salon’s insurers they agreed to negotiate.

The expert said that Andrea’s long hair would take 4 years to regrow.

Andrea also said that her trip of a lifetime to Australia had been ruined.

We advised Andrea to make a settlement offer of £4250 to the insurers, which they quickly accepted in order to avoid going to court.