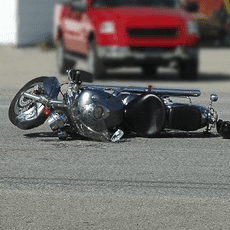 The motorcyclist was riding along a main road when a motorist drove out a driveway into the path of his bike.

The motorcyclist suffered fatal injuries leaving behind a young wife and infant son.

It was a tragic situation and the evidence about the accident meant that it was a very difficult case.

The insurers for the car driver alleged that the motorcyclist had been riding at excessive speed.

Some of the witnesses to the accident also thought he was speeding.

But that was just because the bike was very loud.

When we interviewed the witness it became clear that they weren’t really sure what they had seen.

We also obtained expert evidence from an accident investigator.

The investigator inspected the bike and said that the damage wasn’t consistent with a high speed collision.

In other words, he didn’t think the motorcyclist was speeding.

But the insurers for the car driver still refused to accept any liability at all for the accident.

So we brought court proceedings on behalf of the family of the motorcyclist.

On the morning of the trial the insurers agreed to negotiate.

Our client then accepted an offer of £70,000 in settlement of the claim.