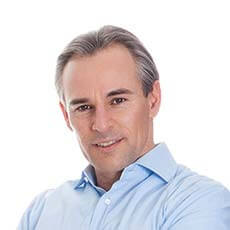 Peter Ronson asked Mulderrigs to represent him after he was knocked down whilst attempting to cross the road.

At the time of the accident he was approaching retirement age.

But he was still working full time as a beach patrol officer at a seaside town in the North West.

Contractors for the local council were carrying out a major redevelopment on the sea front.

This work involved the creation of a complicated contraflow system for traffic on the promenade.

Peter was attempting to cross the road on his way back from working on the beach.

He reached the central reservation but was knocked down as he set off across the second carriageway.

Peter was hit by one of the contractors wagons which came from his right as he attempted to cross.

He suffered a very serious injury to his right leg and had to undergo a below-knee amputation.

It was clear from the outset that Peter’s claim would be very difficult.

Peter said he was taken by surprise because he wasn’t expecting traffic in the second lane to approach from his right.

But he had known about the contraflow system for a while from working on the beach.

There were some hazard warning signs up for pedestrians.

And some of the evidence suggested that Peter had stepped out leaving the lorry driver little chance to avoid the collision.

It was clear that Peter would be held partly – maybe wholly – to blame.

But Mulderrigs have been dealing with difficult pedestrian accidents and amputation claims for over twenty-five years.

So we agreed to take on his claim on “no win no fee” terms.

The lorry driver clearly had a chance to see Peter and take evasive action.

And the contractors and the council could have done much more to provide safe crossing places for pedestrians.

So we believed that the contractors, the council and the lorry driver would also be held partly responsible for the accident.

The action was  brought against the council, the contractors and the lorry driver.

Not surprisingly, all of the insurers denied any responsibility for the accident.

And we also gathered evidence about his loss of earnings and other financial losses.

The insurers agreed to negotiate with us as the trial was approaching.

Following those negotiations Peter accepted a settlement offer of £121,000.

It was probably only about 1/3 of what he might have received if he had won in full.

But Peter realised that this was a very difficult case.

Many solicitors would have refused to take it on.

And there was certainly a real risk that Peter could have lost the case altogether, and received nothing.

So he was delighted with the settlement.